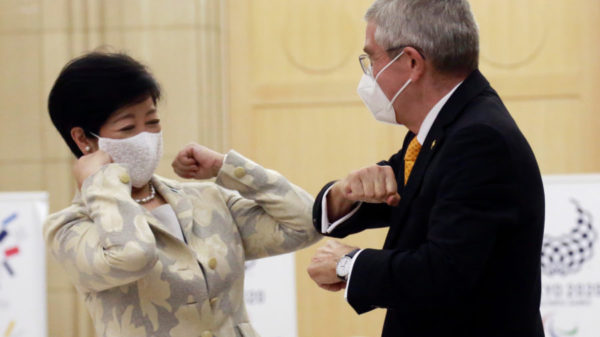 Did they give each other the word? Within hours, Tuesday, November 24, two of the Tokyo Games’s top decision-makers expressed confidence and optimism in hosting the Olympic event next year. Thomas Bach, the President of the IOC, and Yuriko Koike, the Governor of the Japanese capital, spoke of the Games in the future, taking care not to let doubt slip between their words.

Yuriko Koike did it the old fashioned way. She spoke to the media for about 40 minutes at a press conference at the Foreign Correspondents’ Club of Japan. The theme of the day was not exclusively Olympic, but with less than 250 days up to the opening, her predictions for the outcome of the Games received the most comments.

The governor of Tokyo does not leave her role. She believes in the Games, with or without a vaccine. She even believes in it with the public in stadiums and halls. And she says it in all circumstances. “The best scenario… would be for all athletes from all countries to come here in safety and peace of mind and for the Olympics to be able, like in previous years, to be held in the presence of all spectators”, suggested Yuriko Koike.

Ideal, indeed. But an ideal that is hard to imagine today, in a Japanese capital where the number of new cases of COVID-19 has exceeded 500 a day over the past week.

Very lively, Yuriko Koike did more than show her confidence in the hosting of the Games in July and August 2021. She even designed a future marked forever by the Japanese experience for the Olympic event. “After Tokyo, Paris will host the Games in 2024, then Los Angeles in 2028. We are going to create a new model that will benefit the post-COVID world and I want to pass it on to these two cities”, she said.

Cool. But it is not certain that the organizers in Paris and then in California are very keen to take inspiration from a “model” whose final budget could turn out to be four, to five, times greater than its initial version.

Cautious, Yuriko Koike did not fall into the trap of confidentiality in the face of questions about measures envisaged by Japanese organisers to fight the pandemic next year. But she hinted that the athletes may have to forgo the pleasure of communal meals at the buffet in the village cafeteria. “We are looking at the individual measures that will need to be put in place to organise the Games”, she said. A meal tray per person brought to the rooms? Sad prospect.

Thomas Bach, now. Decidedly more digital than the governor of Tokyo, the IOC President presented himself all smiles in a video for the Olympians. He spoke to the athletes on Tuesday, November 24, for a short message recorded a week earlier on the balcony of a room in the Tokyo Games Village.

“These moments spent in the Olympic Village will be etched forever in your memory”, explained Thomas Bach after removing his mask. “And with the conditions that our Japanese friends offer here, the experience will be even more fantastic. This is the place to be in nine months. I am very happy to be able to welcome you here in the Olympic Village in Tokyo”.

Always at ease in his role of unifier, Thomas Bach insists, always for the athletes: “Prepare for these Olympic Games and continue to train hard, even in these very difficult circumstances in which many of you, I would even say most of you, are right now. But if you look around me I think it’s totally worth it. I look forward to seeing you at the Tokyo 2020 Games, in 2020 plus one”.

The IOC President predicts a “unique experience” for future competitors. It will be, without the slightest doubt. Unique in every way.