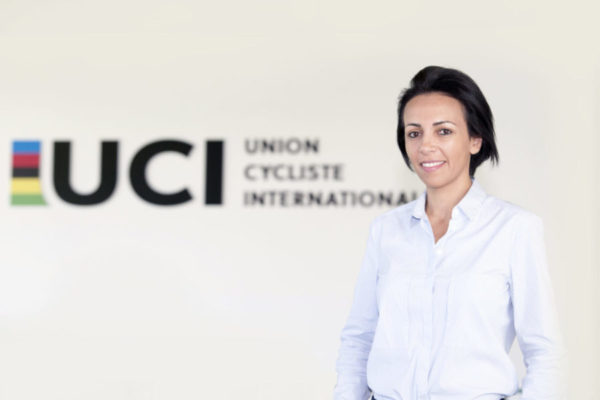 After studying law and several experiences in law firms in Paris and Lausanne, Amina Lanaya joined the Union Cycliste Internationale (UCI), the governing body of world cycling, in January 2006 as a lawyer. She worked in particular on anti-doping. In 2013, she changed functions to take on the post of Deputy Director General. Four years later, she took a further step to become Director General, initially by interim, before being confirmed to this function in 2018. At 40, she now heads a team of 120 people in Aigle, Switzerland, between the international federation and the UCI World Cycling Center. Mother of two children, she lives on the shores of Lake Geneva, not far from the UCI offices.

Since your professional beginnings, what has been the most memorable experience of your career?

Amina Lanaya: The current period, marked by the coronavirus, is unique from all points of view. It is the most difficult and complex that the sports movement has known. It will mark us all. But before that, I would say that the most formative experience was my seven years in the legal department of the Federation. I learned a lot during this time, which was arguably one of the most difficult for the UCI. The Lance Armstrong years. We lost a lot of credibility, we had to rebuild ourselves. That experience made me the woman I am today. The first female CEO of the UCI. The youngest, too.

How do you see, in your role at the UCI, the current economic situation and the uncertainty of the months to come?

Since last March, I entered a period of crisis, with permanent risk management. The UCI brings together eight different sports disciplines. We are almost eight international federations under one roof. But road cycling remains the most visible discipline, with the densest international calendar. It is also, through its world championships, our main annual source of income. The impact of the COVID-19 pandemic has been greatest there. But, unlike a lot of international federations, we haven’t canceled all or part of the season. We tried to save the competitions, with a resumption of the news as early as last July. We never gave up, and we were rewarded with the very successful organisation of the UCI Road Worlds in Imola, Italy. This health crisis has shown that we are able to work together in professional cycling. It has shown that the UCI can lead the discussions and be heard. We also had to deal with an unprecedented economic situation, with the postponement of the Tokyo Games. Every four years, the UCI receives more than 25 million Swiss francs from the IOC, most of which goes to the UCI World Cycling Center, responsible for the training and development of our sport throughout the world.

How would you define the way you exercise your role as CEO?

I am passionate about it. I like the people, the dialogue and the exchanges. I want to understand things and make my colleagues understand them. I am going to the end of things, but trying not to overlook the human aspect. For all these reasons, I was very happy and proud to see that we had been able to work together, all stakeholders in cycling, since the start of the health crisis. I also have an excellent relationship with my President, David Lappartient, and my Board of Directors, which greatly facilitates my work at the UCI.

What are the three most important values ​​for you in your professional activity?

First, passion. I love what I do and I want people around me to experience the same passion too. Then, unity. In the world of cycling, it has not often been shown in recent decades that people can work together. Today we are proving that unity is possible. And we will continue. Finally, loyalty. It is essential in my eyes in professional activity as in personal life. These are values ​​that I try to instill in my children every day.