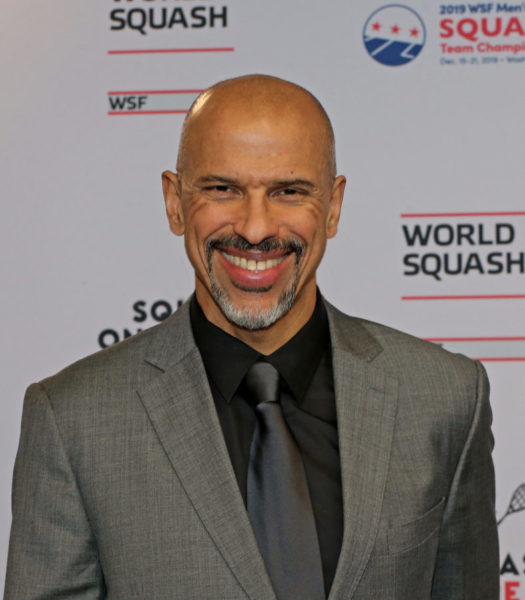 After starting at Coca-Cola, William Louis-Marie notably went through the European Games in Baku 2015, where he held the role of communications director, before joining AIBA in Lausanne, as communications director at first, then as general manager. Since last December, he has held the post of General Director of the International Squash Federation (World Squash), a strong body of 150 member countries, in charge of a discipline that has 10 to 15 million regular practitioners worldwide.

1) Since your professional beginnings, what has been the most memorable experience of your career?

William Louis-Marie: My career has been built around meetings or events related to sport. I wanted to become a sports journalist, but my career started in communication. The events that struck me the most all have symbolic and historical value. My first Olympic Games, in 1996 in Atlanta, where I took care of the French-speaking press for Coca-Cola: Muhammad Ali, surely the greatest sportsman in history, lighting the Olympic flame, then the patriotic emotion of Marie-José Perec’s gold medals, or even Michael Johnson’s world records (with whom I had the chance to dine 20 years later in Baku during the first European Games). Two years later, the 1998 FIFA World Cup and the immense joy and pride of having worked for Coca-Cola while supporting the France team. But the operations involving young people marked me even more: the programs around the first flag bearers and ball collectors at the 1998 World Cup in France, a tennis exhibition with Yannick Noah in Ivory Coast for an association that I supported, the meeting of a young Scotsman with the world heavyweight champion Vladimir Klitschko when I served as executive director of the AIBA… I realized on these different occasions the impact of sport on the lives of young people.

2) How do you see, in your role within World Squash, the current economic situation and the uncertainty of the months to come?

The sports world has come to a complete stop. More than 23,000 events were postponed or canceled in the last spring alone. All the international federations have had to redefine their calendar, support their members in difficulty, reassure the athletes, find innovative solutions to ensure the continuity of their activities. We also had to review our way of working, using digital technology and videoconferencing. Squash, because of its specificity, will have a slower recovery, especially at the level of competitions. We immediately collaborated with our various committees, but also with the Association of Professional Players (PSA), to involve them and produce protocols allowing the resumption of our discipline while respecting the restrictions imposed by local authorities. The difficulty for an international federation is to respond to all its members who face very varied economic, health, political and regulatory contexts. A comprehensive approach no longer works. However, we must very quickly plan and envision our sport of the future by listening to our partners, collaborating with the organizers of multisport events and being close to our members. Listening, evaluating, adapting and planning are our watchwords at the moment.

3) How would you define the way you exercise your leadership role?

I asked myself what was the meaning of my function, what are the values ​​of the federation that I represent, what the members of World Squash, my teams, expect from me, while we are dependent on the evolution of a virus unknown less than a year ago. And then, a question transcends our own functions: what is the role of sport in our society, when human lives are at stake. We must give meaning to our actions, be able to trust even more because the solution will not necessarily be the one we had envisioned. Reassure, understand, support and guide remain essential axes for a leader in this period of general doubt.

4) What are the three most important values ​​for you in your professional activity?

When you run any company, you need to be aligned with its values. However, today we are faced with a more global questioning of our universal values. The repercussions of the #BlackLivesMatter movement also forces us to reflect on how sport makes the world a better place. Sport has been a tremendous vehicle for emancipation for many men and women, but it has also been widely used for the purposes of discrimination, the inferiorisation of women and the racialisation of individuals. The most important values to my eyes are humility, exemplary character and tolerance. They will help us build an environment more respectful of our planet and aligned with the evolution of our world and the expectations of its citizens