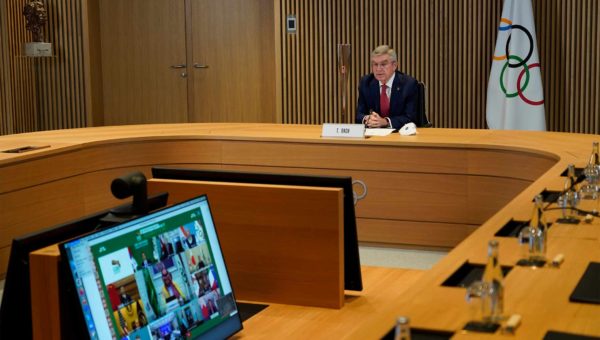 The times are changing. For the second time since his election as IOC President, Thomas Bach spoke on Sunday (November 22nd) to the leaders of the world’s major powers at the G20.

Last year he made the trip to Osaka, Japan, at the invitation of Shinzo Abe, the Prime Minister of the archipelago. This time Thomas Bach stayed in his office at the Olympic House in Lausanne. But he held the same speech, virtually. With one nuance, but of importance : the health crisis.

In Osaka, in June 2019, Thomas Bach pulled out of his pockets the usual values ​​of Olympism, including universality and solidarity. The planet was then living in the world before. Sunday, November 22, the German leader added a health dimension to the range of Olympic arguments. Logical.

“Sport can save lives, said Thomas Bach, invited to speak to his computer screen by Saudi Arabia, which chairs the G20 this year. During the coronavirus health crisis, we all saw how important sport is for physical and mental health. The World Health Organization (WHO) has recognized this by signing a cooperation agreement with the IOC. Following the conclusion of this agreement, the United Nations, the WHO and the IOC joined forces to launch a campaign dubbed “Healthy Together”, carrying out several projects at the international level. We are also preparing to participate in a global campaign for immunisation.”

Returning a few days earlier from his first visit to Japan since the start of the pandemic, Thomas Bach did not hesitate to mention the Tokyo Games. Right in his boots, he did it in the future tense, leaving skeptics to use the conditional.

“This health crisis will have taught us an important thing: we need more solidarity, insisted Thomas Bach. More solidarity within societies and more solidarity between societies. We will soon be celebrating this example of solidarity on the occasion of the Olympic and Paralympic Games postponed from Tokyo 2020. These Olympic Games, in which the 206 National Olympic Committees will participate as well as the Refugee Olympic team formed by the IOC, will send a strong message of solidarity, resilience and unity of humanity in all its diversity. Under these circumstances, I am extremely grateful to Japanese Prime Minister Suga Yoshihide for sharing our determination.”

The Games, therefore. Next year, as planned. Thomas Bach hammers it without hesitation. Within 250 days of opening, he remains in his role. No way for him to entertain doubt, especially in the face of world political leaders.

Obviously, his speech hit its mark, at least in the texts. The final declaration of the G20 summit did not forget to mention the Tokyo Games. “We salute Japan’s determination to host the Tokyo 2020 Olympic and Paralympic Games next year as a symbol of humanity’s resilience and global unity in the face of COVID-19. (…) We are impatiently awaiting the holding of the Olympic Winter Games in Beijing in 2022″, the document reads.

The evolution of the health crisis may take care of sending these fine words back into the dungeon of history. But in the meantime, the tone is optimistic. On the question of the Games, the planets are aligned among the great of this world. Not that frequent.

For the rest, nothing very unexpected. Thomas Bach called on the G20 countries to respect and support the political neutrality of the Olympic Games and the IOC. “I humbly ask you under these conditions to lend your support to our political neutrality, in order to help us make the Olympic and Paralympic Games this great symbol of global solidarity, free from all forms of discrimination.”

The discourse is not new. But it takes on a very particular dimension in 2020, a year which saw Belarus ignite after the reelection of Aleksander Lukashenko (also president of the National Olympic Committee), the execution by the Iranian authorities of wrestler Navid Afkari, and finally, the call for a boycott of the 2022 Winter Games by a large number of human rights organisations. Each time, the IOC has been asked to take sanctions. Each time, he refused.