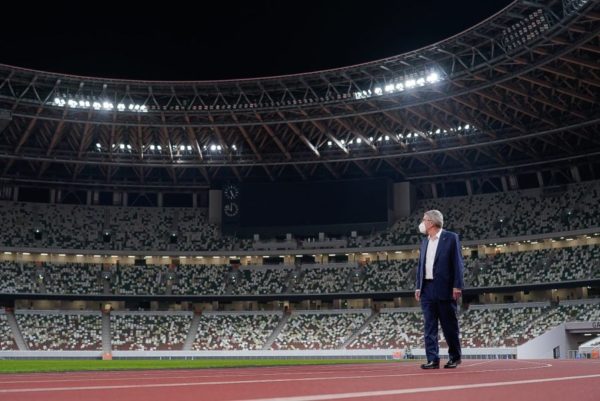 After the offices, make way for the sports facilities. After the political leaders, it is the turn of the athletes and Olympic executives. Thomas Bach did not take off his suit and tie on Tuesday, November 17, the third day of his four-day visit to Tokyo. He also did not give up his sanitary mask. But the IOC president has changed the scene.

On the program, an extended stop at the athletes’ village. Accompanied by John Coates, Thomas Bach made the tour of the property, without straying from Yoshiro Mori and Toshiro Muto, respectively president and executive director of the organizing committee. The small squad of officials were welcomed by Saburo Kawabuchi, the mayor of the village, former president of the Japan Football Association.

“The village will be the place to be”, said Thomas Bach. Without a doubt. But 250 days before the opening of the Games, very clever who can now imagine its configuration during the Olympic fortnight.

According to the initial plans, each room will be equipped with one or two beds. But, due to the health crisis, the Japanese could be forced to review their copy and place only one tenant per room. Question: how to accommodate everyone in such a configuration? A puzzle.

Second stop, later in the day: the National Stadium, where the ceremonies and athletics events will be held. Thomas Bach walked around without hurrying, observing the stands of an enclosure supposed to be able to seat 68,000 spectators. He let himself be won over by the atmosphere of the place.

“In nine months, we will come to this stadium for the Games, then it will be the real Olympic stadium, suggested Thomas Bach. There is already a lot of atmosphere. Of course, everyone would like to see a full stadium next year, but the top priority of the IOC and the Organizing Committee has always been, and remains, to provide a safe environment. For the athletes but also for the spectators.”

Change of scenery, therefore, but the tone remains the same. Thomas Bach continues to show his confidence, without silencing his caution. It prepares athletes for difficult sanitary conditions. It evokes sites with deliberately reduced capacity. Above all, he once again repeats the vaccine option.

Thomas Bach admitted on Tuesday November 17th: “The IOC will encourage the athletes and other participants – especially those who will be living in the village – to get the vaccine. But the decision will be up to them. I am sure many, many athletes and participants will take this advice. Maybe they won’t even need it because they will have done it on their own.”

Surprise: Thomas Bach didn’t just chat about Tokyo 2020 during his visit to Japan. The IOC President took the opportunity to meet Scott Morrison, the Prime Minister of Australia, also in the Japanese capital. The meeting was not announced on the agenda. John Coates, also present in Tokyo this week as part of the IOC delegation, is undoubtedly no stranger.

Scott Morrison “reiterated the Australian government’s full support for Brisbane and Queensland’s bid for the 2032 Games”, according to the official version. Well done.