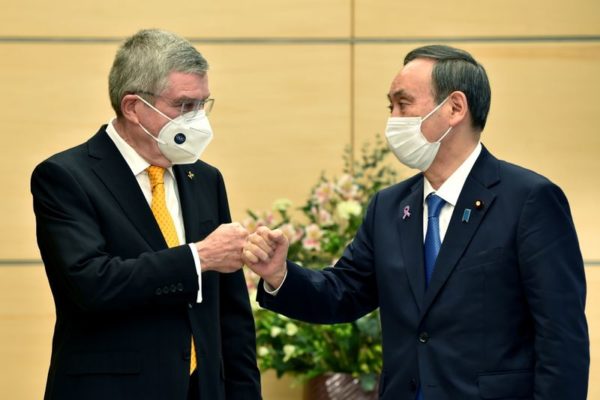 No time to waste for Thomas Bach. Arriving Sunday, November 15th at Haneda Airport in Tokyo, after a charter plane trip from Switzerland, the IOC President attacked with his feet to the ground on the first day of his visit to Japan. On Monday morning, he met the new Prime Minister of Japan, Yoshihide Suga (photo above).

Announced several weeks ago, Thomas Bach’s trip to the Japanese capital is not a tourist trip. It is not really sporty either, although the second day of the visit, Tuesday, November 17th, includes a meeting with Japanese athletes, a tour of the future Olympic village and a hook from the National Stadium.

250 days from the presumed opening of the Summer Games, the IOC President is above all seeking reassurance. The sports movement, first, but also the Japanese public, whose mistrust of the Olympic and Paralympic event is climbing at about the same speed as the cases of COVID-19.

His visit is intended, above all, to be diplomatic. Like a first day on Monday, where Thomas Bach goes on to meet the most recognizable figures of the Games.

First stop, therefore, the Prime Minister’s office. The two men, each masked, spoke in much the same language. Yoshihide Suga reiterated his promise that the Tokyo Games would be held next year. He insisted on his “determination” to host the competitions. He said the event would provide the world with “proof that humanity has overcome the virus.”

Thomas Bach, for his part, once again expressed his conviction that the events could be held next year in the presence of spectators. He had already suggested it, in the same confident tone, last week from the IOC headquarters in Lausanne, after a virtual meeting of the Executive Board.

Second stop: Shinzo Abe. Thomas Bach killed two birds with one stone by meeting, within hours, the current and former Japanese Prime Minister. With the first, he spoke of the future. To the second, forced last September to return the keys to his office for medical reasons, he presented an IOC award for his contribution to the Games and to the Olympic movement. Friendly.

The rest of the day ? At same speed. An exchange with Yuriko Koike, the governor of Tokyo. Then a meeting with Yoshiro Mori, chairman of the Games organizing committee, also a former Prime Minister. Finally, to complete the program, a joint press conference with Yoshiro Mori.

Thomas Bach let it be known, without the slightest reservation, last week in front of the media : during his visit to Japan, the first since the decision to postpone the Games, it is not planned to discuss the possibility of a cancellation of the Olympic and Paralympic event. The subject is certainly not excluded from the multiple scenarios prepared for months by the IOC and the organizing committee. But now would be a bad time to place it at the top of the pile.

In Tokyo, this week, Thomas Bach is the first communicator of the Olympic cause. Through his visit to Japan, he hopes to inspire confidence and optimism. Two words that the Japanese organizers can not do without, as discussions continue with their national sponsors for an extension of the contracts. Also on time for the Japanese public begins the process of refunding tickets to Olympic events.