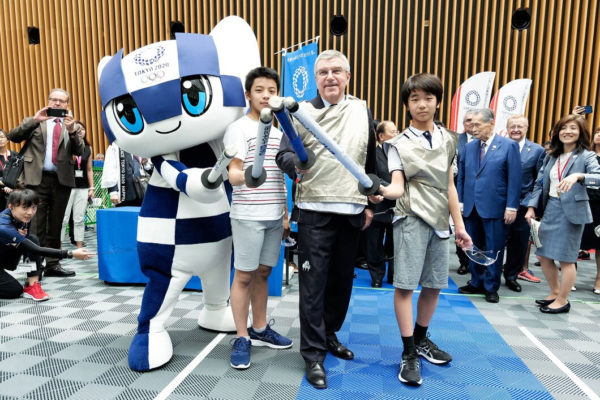 The weeks and months go by before the alleged opening of the Tokyo 2020 Games, the second wave of the health crisis hits Europe without holding back. But Thomas Bach, IOC president, has faith in the future. He is not shy about it. And even shows increased confidence as the countdown will drop below the 250-day mark next week.

Thomas Bach answered questions from the media on Wednesday, 11th of November, after another video conference of the IOC Executive Board. He kept the helm of the ship, despite daily announcements of cancellations of international sporting events around the world. He repeated it without a caveat of uncertainty : the Tokyo 2020 Games can be held next year. They should even be able to take place in the presence of spectators, Japanese for sure, and perhaps also foreigners.

Where does this confidence come from ? The answer lies in three points. The first is very pragmatic : Thomas Bach attended from a distance the four-nation gymnastics tournament organized on Sunday, November 8th in Tokyo. Thirty-two athletes, three quarters of whom came from abroad (China, United States, Russia), and more than 2,000 spectators in the stands of the Yoyogi National Stadium. Risky. But the result gave him confidence : the competition was not marked by any incident, especially health. Not a single case of COVID-19.

“Having seen the various tests being carried out in Japan, I think we can be more and more confident that it will be possible to have a reasonable number of spectators at the Olympic venues, Bach said. How much and under what conditions, again, very much depends on future developments.”

The second reason, the IOC president now evokes in each of his media interventions : the toolbox. Behind the German leader’s new fetish expression hides the endless array of anti-COVID-19 measures prepared for several months by the IOC and the organisers of the Tokyo Games. According to Thomas Bach, they would cover just about anything that can be imagined to ensure the safety of athletes, their staff, officials, media and spectators : travel restrictions, quarantine protocols, tests anti-coronavirus, transport, etc.

But, cautiously, Thomas Bach still refuses to open the famous toolbox in public. “I can’t and don’t want to go into details, because then we would be here in an hour”, he explained Wednesday, November 11 at a press conference.

Finally, the last pillar of the confidence expressed by Thomas Bach rests on the arrival of a vaccine. The IOC president reiterated that he is in contact with the WHO, but also with “a number of manufacturers”. He explained that “several options are being explored as to how vaccines might be made available” to the Olympic movement. But he warned that the athletes would not be given priority. “The first wave of immunizations must be for people in need, for high risk groups, for nurses, doctors and for all those who keep our societies alive“, he said.

Thomas Bach will travel to Tokyo next week. At this stage in the preparation of the Games, his trip will, above all, be symbolic. He wants to reassure the Japanese public, especially. Reassure and share his trust. Asked whether the scenario of a possible cancellation would be discussed with his Japanese interlocutors, the IOC president did not hesitate on the answer to be given. “No“, he just replied.