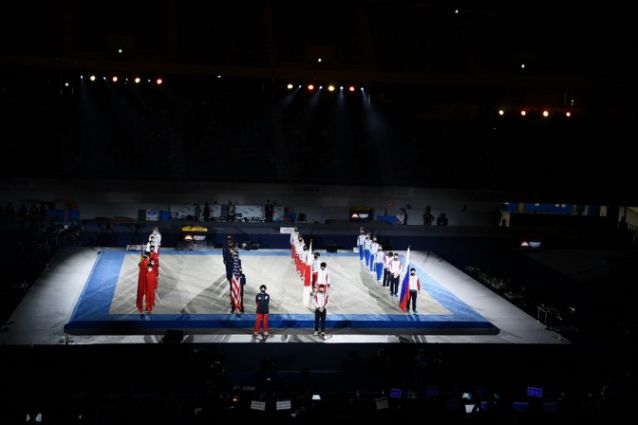 A good or bad sign ? Tokyo hosted its first international sporting event on Sunday, November 8th, since the start of the COVID-19 pandemic. The Friendship and Solidarity gymnastics competition was held at the Yoyogi National Stadium in the Japanese capital, site of swimming events for the 1964 Tokyo Games. It went off without a hitch. But the four-country competition was wrapped in movie-like safety and health precautions. Sports in this new age…

The athletes, first. Three invited nations (China, United States, and Russia), plus the host nation, Japan. Twenty-two foreign gymnasts and eight Japanese, including Kohei Uchimura, the two-time Olympic champion in the individual all-around. The Americans were the first to arrive in Tokyo in the middle of the week, after 14 days of isolation in their homes. The Russians followed the next day. On the same day, the Chinese delegation disembarked at the Tokyo airport as if in the midst of a biological warfare (photo below). 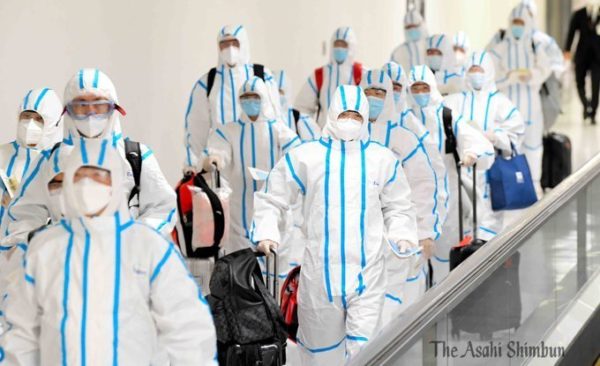 At the end of their isolation, the gymnasts were tested before their departure for Japan. They were checked on arrival and again during their stay with a daily test. On site, each of the delegations was accommodated in a secure hotel, where an entire floor was reserved for them. Access was monitored by security guards. Athletes had to use a specific exit and entry door to limit contact with other clients. Their movements outside the hotel were reduced to the strict minimum: training, competition, and airport.

The spectators, next. Their number was limited to 2,000 people, for a sport venue capable of accommodating 13,000. They were subjected to a temperature measurement as they entered the olympic site. Wearing a mask was compulsory in all circumstances, and social distancing was respected in the stands. Finally, they were asked not to show their enthusiasm exuberantly for a gymnast’s performance, by whistling or shouting for example. However, applause was ok, but nothing more.

Yoshiro Mori, Chairman of the Tokyo Games Organizing Committee, and Seiko Hashimoto, Olympic Minister, attended the competition. Thomas Bach, for his part, sent a video message to the athletes and the public, broadcast before the start of the competition. Very elegant in his blue suit, the IOC President explained, in essence, that the holding of this event showed that it was possible to organise a sporting event in complete safety. He suggested that this Friendship and Solidarity competition sends a strong signal to the international sports movement. Finally, he recalled that the Yoyogi National Stadium, built for the Tokyo 1964 Games, had been the setting for some great Olympic stories and that it would still be next year.

Encouragement ? Let’s wait. Introduced as a pre-Olympic test, the gymnastics competition had the merit of closing a long parenthesis without the slightest international event in the Japanese capital. It allowed the Japanese organisers to verify in near real conditions certain sanitary measures intended for next year. But the gap remains immense between a competition of thirty athletes and two thousand spectators, contested over a single day, and fifteen Olympics days with 10,500 competitors, media and officials by the thousands from all over the world, and an alleged international audience.

Kohei Uchimura summed it up in his own way, after the competition: “Unfortunately, 80% of the Japanese believe that the Tokyo Games should not be held due to the coronavirus pandemic. I know it’s quite natural to think so. But I would like people to see it from a different perspective. I would like that, instead of telling themselves that we cannot present the Olympics, they instead wonder how to succeed in organizing it.”